Fourth Ebola Update and Other News

Well, it is time once more to provide another update on the Ebola situation in Liberia. But, first, we wish to express our thankfulness to the merciful God of heaven and earth for helping us to be alive and healthy at this point in time. We are grateful to God because many people, both Liberians and non-Liberians, have lost their lives to the virus since its outbreak in March, but he has kept us alive through His grace. Already more than 2,500 people have died thus far.

We are having a pre-outreach briefing

However, in the last few days, there have been reports that the number of Ebola patients going to treatment centers is slightly reducing in two of the highly hit places – Montserrado County, whose capital is Monrovia, and Lofa County – but a lot of people are welcoming and accepting this quite good news cautiously and skeptically for two main reasons. First, the infection rate of the virus is increasing in other parts of the country, like in Grand Cape Mount County. Second, the infection rate has also re-intensified in Sierra Leone and Guinea, where it had earlier been reported that the virus had reduced.

Some Highlights and Related News

1. Many new Ebola treatment centers and laboratories are being built in various parts of the country.

a. The US Government, through USAID, is constructing a huge treatment center in a place called Congo Town, which is right around the capital.

b. A fraternity organization just completed another 96-bedroom treatment center and turned it over to the government a few days ago.

2. The government of Cuba sent 49 doctors and health experts to Liberia a few days ago, to help in the fight against the virus.

3. Another Liberian doctor called Thomas Scotland died of the virus on Monday. He left behind four little children and a pregnant wife. Many of Liberia’s doctors and nurses have died of Ebola in many different places. It is a serious blow to our already broken healthcare system.

4. Another problem faced is strike actions staged by health workers. They have been complaining about low salary and lack of benefits and other incentives. Liberian lawmakers have summoned the Minister of Health on a few occasions, but nothing has really changed. In fact, some of the lawmakers are demanding the resignation of the Minister, but he says he has the support of the President

5. There have been reports that the government is planning to dismiss a lot of people, which the lawmakers have condemned and warned the Executive to drop the plan, but the government has denied having any such plan. Most people are already jobless in this country. Besides, many people working with the government were told to stay at home because the government considers them “non-essential staff.”

6. The prices of food and medicines, as well as other essential commodities, have increased on the Liberian market. According to the Minister of Commerce and Industry of Liberia, Mr. Axel M. Addy, three main reasons are responsible for the increase in prices.

7. Liberia should have had a mid-term election for senators on Tuesday, October 14, but that was not possible because of the state of emergency imposed as a result of the Ebola outbreak. Meanwhile, the National Election Commission has set a new date, which is December 16.

8. Some in government, including lawmakers, have begun suggesting that schools should be allowed to re-open; however, there has been no official pronouncement from the President on this. 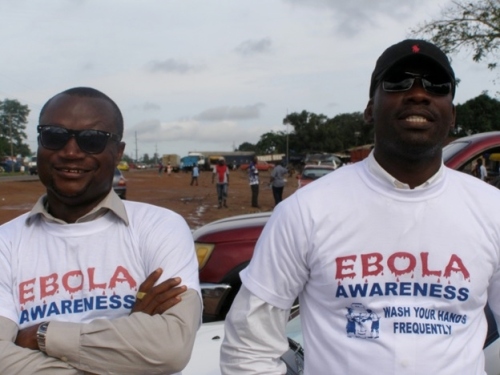 A fellow law student and I before an outreach session

After resting for about two weeks, we commenced Phase Three yesterday, Thursday, October 23. It will go for four weeks, two times a week. I am still the Coordinator for Outreach.

Third Ebola Update and Other News

Although we are aware that you our friends, sponsors, supporters, well-wishers, etc., read and see a lot about the Ebola virus disease (EVD) on various international media outlets, we have come to the conclusion that it is still our duty to update you because of your interest and involvement in the work we all are doing in Buchanan. And so we will continue to fill you in from time to time.

In this update, I wish to focus on Grand Bassa County. Liberia has fifteen counties, and one of the counties is called Grand Bassa. Its capital city is Buchanan – the place where our school is located. As many of you may have already read, Buchanan is about 113km from Monrovia. Ebola is in the county, and it is definitely in Buchanan; however, the county – and by extension, Buchanan – is not as gravely affected as other counties such as Montserrado, Lofa and Nimba. This is good news. Another good news is that, although our school is closed for now because of the Ebola crisis, we have received no news about any of our students, staff or parents contracting the virus or dying of it.

My colleagues and I at the ELWA Junction

On the Ebola statistics of the county, as released by the Ministry of Health on October 2, the total confirmed, probable and suspected cases was 132: 38 suspected cases, 47 probable cases, and 47 confirmed cases. The statistics summarize what is happening in each county; they do not indicate what is happening in each city. This is why I am unable to indicate the number of Ebola cases in Buchanan. Grand Bassa County has a population of 224,839, while Buchanan’s population is about 34,000 (2008 census). 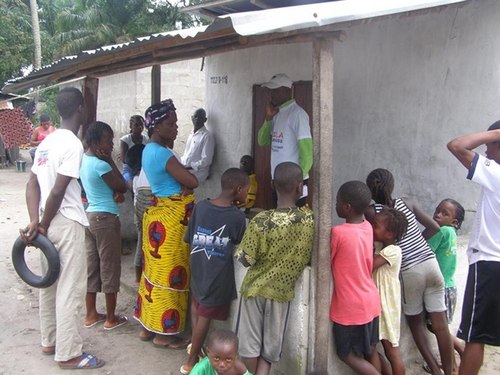 My colleague carrying out Ebola awareness

My colleagues and I in the Jacob Town Community

In a related development, as some of you may be aware, I am a student at the Louis Arthur Grimes School of Law at the University of Liberia. I am also a part-time English instructor at the same university. However, because all schools, including colleges and universities, are closed as a result of the Ebola crisis and most of us have nothing doing for now, we students of the Law School came together and formed ourselves into a group which visits various places – communities, market places, shops, entertainment centers, etc – to carry out awareness about the Ebola virus disease.

We bought our own t-shirts and paid an artist to print on it for us. We use the t-shirts for our outreach. We are not being paid by anyone, nor do we receive donations from the government or any NGO. It is a completely volunteer work to help our fellow citizens observe the safety measures announced by health workers and experts. Our goal is to help prevent people from contracting the virus.

One of my colleagues talking with a household around the St. Francis Junction