After having made individual donations to staff and kids through the school in full view of parents and community residents, two of our seven Swedish guests – Roland and his sister Kerstin – made an additional donation of gifts to the children in the school.

Students standing in line before the distribution

This second special donation was made about one week after the general donations were made on April 10, 2014, at the school in Buchanan. Roland and Kerstin had originally planned to donate the items to a school they had heard was existing in Nimba County in northern Liberia.

However, upon their return to Monrovia, after their interactions with the staff and kids in our school, they called Lena and said, “We realized that Help Liberia Foundation Community School is a very good school. The students and the staff are wonderful people. Besides, we are not sure of the status of the northern Liberian school that we are planning to take these gifts to. Therefore, we have decided to give them to your school (referring to HFL Community School).”

We at the Help Liberia Foundation Community School consider this donation a special one in that it was made after serious reflections about the school and its activities. The fact that Roland and Kerstin kept it for a different school, but later decided to donate it to the kids in our school makes it even more special.

Because the items were given to Lena in Monrovia after everyone had already left Buchanan, Lena brought them to Paul on the campus of the University of Liberia, where he teaches and also studies law, and relayed Roland and Kerstin’s message, saying: “Roland and Kerstin gave me these items and told me to give them to you so that you can distribute them among the kids so that each child in the school can have at least one of the items. This is their (Roland and Kerstin’s) wish and instruction. Please do as they have recommended.”

Paul received the items on behalf of the school and the kids and thanked the donors, through Lena, promising to take the items to Buchanan. And, so, as agreed upon, the items were taken to Buchanan and distributed as indicated by the Roland and Kerstin. 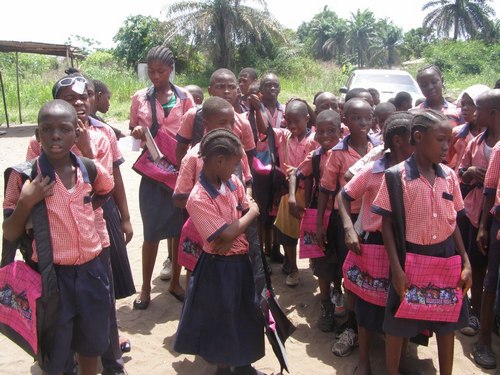 Students with some of their gifts

We are grateful to Roland and his sister Kerstin for their humanitarian gesture toward the kids. The gifts were enough to cover all the children present; every kid received at least three items and they were happy to have them.

Click on pictures below to see a larger version.

Paul and Lena on the campus of the University of Liberia

Staff members with the gifts

Paul unpacking the gifts from the suitcase before the distribution

Students standing in line before the distribution

Students with some of their gifts

Waiting for more items to be distributed

As we mentioned in our most recent article, the seven Swedish guests who visited our school last week donated a variety of gifts to the kids and the school. 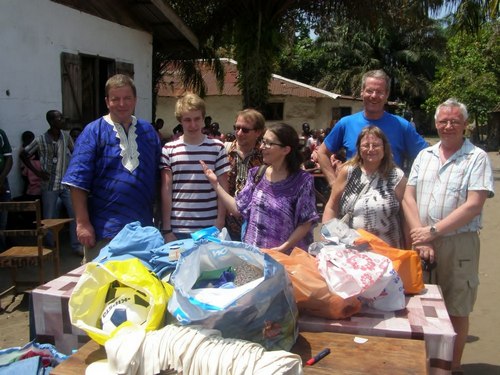 Guests posing behind some of the gifts brought by them

The donation of gifts by our Swedish friends is something that is done every time they make a trip to Liberia and visit the school in Buchanan. Some of the gifts are meant to be given to the kids and others are meant to be used by the school. This has been the trend.

Roger posing with staff after his donation to them

This time around, however, one of the guests, Roger, decided to bring gifts only for the staff of the school. “Every time the issue of gifts is mentioned, the kids are the ones generally thought about, but I wanted it to be different this time around. So I brought gifts not for the kids, but for the staff who are making sacrifices to help the kids,” remarked Roger who brought 25 quality T-Shirts for the staff besides the office and school supplies he donated.

Meanwhile, the staff members have decided to use the T-Shirts, which are blue, as a kind of uniform for them. They are planning to use them on Mondays, Wednesdays and Fridays.

P-O and his son Elias brought additional judo clothes, jump-ropes, pencils and other items. He also gave the staff US$100.00.

Kerstin donated some caps and pencils, while she and her brother Roland donated a lot of toys to the kids.

Lena and Anders brought additional football jerseys, ten footballs, clothes and many other items. Still on sports, they also brought the outfit for the goal-keeper.

Guests posing with kids at the school

We are profoundly grateful to our friends for this continuous humanitarian gesture on their part. It is our hope and prayer that they will continue to enjoy good health and long life so that they can continue to render such assistance to the school, the staff and the kids. It is also our hope that other individuals and institutions will join them in the effort to help the school and the kids in whatever way they can.

Kerstin posing with students after her donation

Guests posing with staff after the donation

Guests posing with kids at the school

Guests posing with kids after the donation

Anders talking with kids about the gifts

Guests posing behind some of the gifts brought by them

Roger posing with staff after his donation to them

Lena and Anders posing with kids after their donation

Lena and Anders unpacking the gifts they brought for the school

Students at the program

Those who made the trip were Lena and Anders (they are the school’s current contact persons abroad), P-O, Elias (P-O’s fifteen-year-old son), Roger, Kerstin and Roland.

Although our visitors arrived in Buchanan on Wednesday, April 9, it was really on Thursday, April 10, that they spent almost the whole day with the kids, staff and parents of the school.

Lena preparing the kids for a Swedish play

A special welcoming program was held in our visitors’ honor on that day. During the program, the director of the school, Mr. Paul Yeenie Harry, welcomed the guests and introduced them, especially the four new visitors, to the audience.

It was an eventful day, not only because the kids and staff, as well as parents, were delighted and excited to have had the guests at the school, but the guests themselves were gleeful for the opportunity they had to meet and interact with the school, especially the kids. 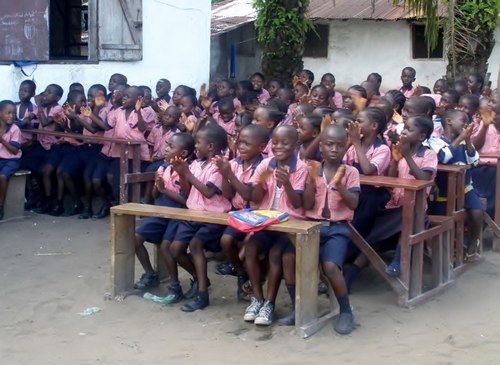 Each of our visitors, besides interacting with the kids in various ways, was given the opportunity to speak to the kids during the program. They encouraged the kids to continue go to school and have a better future and to know that they are Liberia’s future.

Of course, as usual, it was not all about making speeches, but also about presenting gifts brought by our visitors. They brought footballs, jerseys, football pumps, school supplies, clothes, etc. the school authority thanked the guests for the donation and called on them to continue to think about the school. 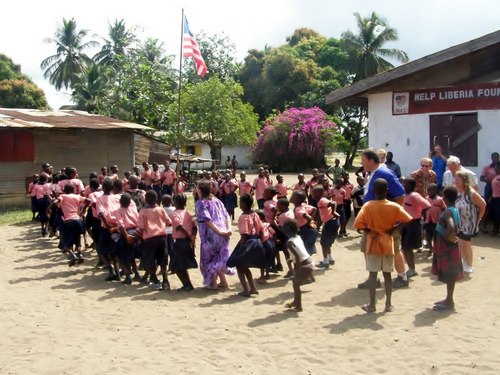 Guests doing a Swedish play with the kids

While speaking to the kids, Roger, considering the condition of the kids and their desire to learn and comparing it with his own childhood days’ experience and opportunities, cried in full view of everyone. It was a very moving moment.

During the ceremony, a female parent thanked the visitors, especially Lena and Anders, for their continuous concern for and support to the school and the kids. 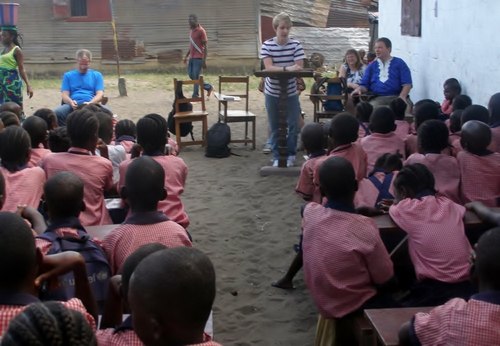 Elias speaking to the kids

At the end of the program, journalists from various media institutions came to interview the visitors about their visit and its importance to the school in Buchanan, which was later played on various radio stations on the same day.

Permit us to stop here for now. Additional information will be provided later.

Click on pictures below to see a larger version.

Roland speaking at the program

Lena preparing the kids for a Swedish play

Kids dancing and singing a song

Guests doing a Swedish play with the kids

Elias speaking to the kids

Students at the program

Attendees at the program

A female parent speaking at the program

Anders making statement at the program

Visitors doing another Swedish play with the kids

Guests posing with some of the parents

Guests posing with some of the school staff

Roger speaking at the program

Roger, Roland and Kerstin on the school campus