Because the school is a primary school, the four students graduating from it will have to attend a different school come the next school year, which starts in September. 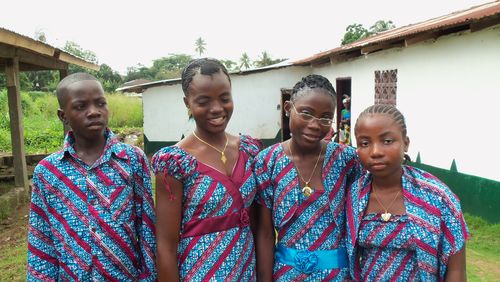 The guest speaker at the program was Mr. Paul Yeenie Harry, who spoke on the topic “Building a Secure Future on Education.” He encouraged the kids to work hard for their education and let nothing stop them or dissuade them from obtaining the future that education offers.

During the ceremony, different students performed various roles, including recitation of Bible verses, saying the names of Liberia’s 15 counties and their capital cities, poems, as well as speeches and phonics activities.

A parent who spoke at the end of the program thanked the school and the foundation helping the school for assisting their kids to get education in a society where illiteracy is high, appealing to the foundation and those supporting it to continue to render assistance to their children.

Meanwhile, the registration process for the new schedule year will begin in August, while the new school year will officially start on 5 September.

The foundation, on behalf of the students, parents and staff of the school would like to express profound thanks to all those who helped to make the school year a successful one. Special thanks go to all the sponsors who are paying school fees for the children. Together we are all working to make this world a better place.