Liberia conducted its presidential and representative elections yesterday, Tuesday, October 10, 2017, all over the country, and our school in Buchanan, Help Liberia Foundation Community School, was used as one of the voting centers selected by the National Elections Commission (NEC). 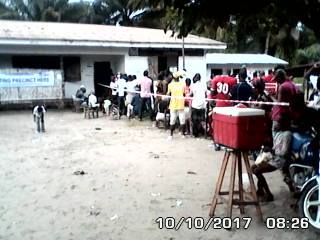 Voters in line to vote on Election Day

According to statistics from the NEC, 2,183,629 Liberians registered to vote in this years’ general elections at 2,080 voting precincts/centers containing 5,390 polling places, and our school was used as one of the voting precincts/centers containing two voting places. As a result of this, our main school building was one of the voting places, while the annex was another one.

Voters in line to vote at HLF School

The elections have already ended and counting has begun. As the results stand now, it seems there will be a second round in November, and it may be between current Vice President Joseph Boakai of UP (Unity Party) and football star George Weah of CDC (Coalition for Democratic Change), which means our school could be used again.

We at the school are glad that our school was used in Liberia’s 2017 historic elections. Thanks to all those who continue to help us to run this school.

This entry was posted in Uncategorized and tagged election, Liberia, school. Bookmark the permalink.