Our school in Buchanan, Help Liberia Foundation Community School, has closed for the 2017/2018 academic year, which started September of 2017.

Kids marching to the hall

The closing program, which coincided with the 2018 graduation exercises of the kindergarten class, was held on the first Sunday of July.

The graduands singing the graduation song, as they march on

Six kids graduated from the kindergarten class. There was no graduation program for the sixth graders because the class had only two kids.

The guest speaker, Madam Mardea B. Remmie, speaking to the students

The guest speaker at the graduation program was Madam Mardea B. Rammie, Ambassador of Peace for the Youth of Grand Bassa County and Secretary General of the Bassa Youth Congress. 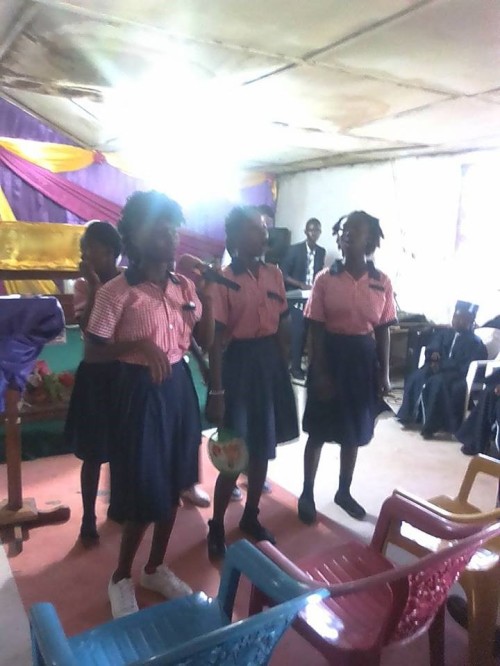 HLF kids singing during the program

We had a successful school year and a successful graduation. Parents, staffers, students, and well-wishes were in full attendance during the program.

The graduates are seated in the hall

We are grateful to all those who helped us to have a very successful academic year. We are especially thankful to all of our Swedish and British friends and sponsors who continue the help the school and the kids.

Guest Speaker Remmie presenting certificate to one of the graduates

Registration for the next school year is in progress, and it will end next month. The new school year starts in September.

The graduates are called up for the audience to see

This entry was posted in Uncategorized and tagged children, education, Liberia, school. Bookmark the permalink.