The three Swedish citizens who visited Help Liberia Foundation Community School in Buchanan last week donated a variety of gifts to the school and the kids.

As indicated in our last article, the gifts donated by Lena, Anders and P-O included two sets of jerseys for the boys and the girls, 25 pairs of black football boots, 10 pairs of physical education sneakers, pencils, pens, judo clothes, a football, a football pump, some candies, a puzzle map about Sweden, books about Swedish animals, chalk, book bags, copybooks, and many others.

Guests posing with students in their new jerseys

Lena and Anders indicated that the sports shoes were given by a Swedish sportswear business. Elizabeth, too, although she didn’t come on this trip, sent some items with Lena and Anders.

Besides the gifts given the school, Lena and Anders also made personal donations to two kids whom they are sponsoring in the school – Rita Bryant and Augustine Tarplah.

The school kids, staff and parents expressed gratitude for the items donated and called upon the visitors to continue thinking about and helping the kids in the school. 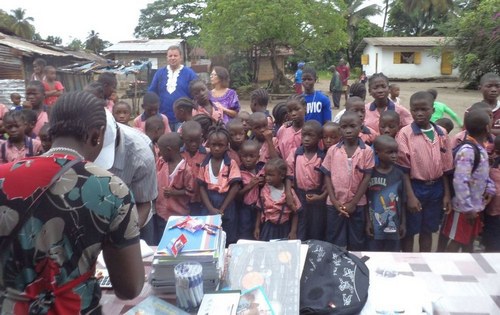 Staff viewing gifts, as guests and students look on

The school is profoundly grateful to Lena, Anders and P-O, as well as all the other people who contributed to the effort that brought smiles to the faces of the kids at the school.

Lena and Anders display a puzzle map of Sweden, as Paul looks on

View a few photos below (click on a photo to see a larger version).

Lena and Anders with Rita Bryant, one of their sponsored children

Lena and Anders display a puzzle map of Sweden, as Paul looks on

Student in his judo clothes donated by P-O, as Lena cheers

Girls in their new jersey

Boys in their new soccer jersey

Guests posing with students in their new jerseys

Students and guests pose behind gifts

Staff viewing gifts, as guests and students look on

Paul displays a pair of the soccer boots, as students and others look on

Paul and Lena examining a gift, as students look on